When last we spoke about C and school, things were not going well at all. I'm happy to tell you things are much better now, mostly because C is no longer IN school. Well, he is, but he doesn't actually GO THERE anymore. Physically, you know. Now school comes to him in the form of a Homebound Education teacher. She brings him his lessons and assignments, takes completed assignments back to school to be graded, and spends four hours a week with him here at the house making sure he understands everything and helping out where he doesn't.

She is fantastic and since we finalized the decision to move him into this program, C has been happier and less stressed than I've seen him in months. Big ups to our school administrators, who floated this as a possible solution when it was something we didn't even know existed. C met with the Homebound teacher before we got started, just to make sure her voice didn't trigger his misophonia, and everything has been way swell. So, yay!

We've also been doing yet more medication adjustments with C. We've stopped the Intuniv because it wasn't really having any effect at all. And we've been weaning him off the Trileptal to see if maybe that was making his anxiety/sensitivity worse. I do think he's much better now anxiety-wise (though not misophonia-wise), but it's hard to tell if that's from the medication changes or the school environment changes or the fact that some of his therapy modalities have also been adjusted during the past couple of weeks. We have another meeting with the doc who monitors his meds next week so we'll see where to go from there.

... reading Scott Kenemore's Zombie, Ohio which is so much fun. Guy comes to after a car crash, has amnesia, discovers he's in the midst of a zombie apocalypse, gradually realizes he is PART of the zombie apocalypse, and hijinks ensue. I haven't read a lot of zombie fiction but I can't imagine there's much out there that's more compelling and fun and oddly poignant than this book.

... watching Top Chef Masters and OMG, if Lorena Garcia wins I'm going to burn down a Taco Bell. (Not really.)(But seriously, how annoying is she?!) I am all in for Chris Cosentino to win this thing so, you know, he'd better. In other watching news, Sons of Anarchy is back! But holy cow, the season premier was horrifying. I'm not sure I'll be able to watch this season if it's going to be like that, much as I love this show. I might not be in the right headspace for it right now.

... listening to this song, because C was singing it the other day and now it's stuck in my head on an endless loop. MAKEITSTOP. 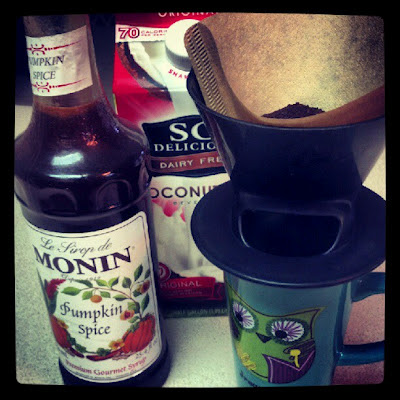 But not from Starbucks.

... feeling so much better now that it's fall. Or almost fall. Or quasi-fall-like. Look, it's September, okay? My pumpkin-shaped basket full of cinnamon-scented pinecones is on the table, it's been cool enough to wear jeans on at least two recent occasions, and my reverse seasonal affective disorder is going away. I'm calling it close enough.
Posted by Kathy at 10:29 AM

Promote Your Page Too