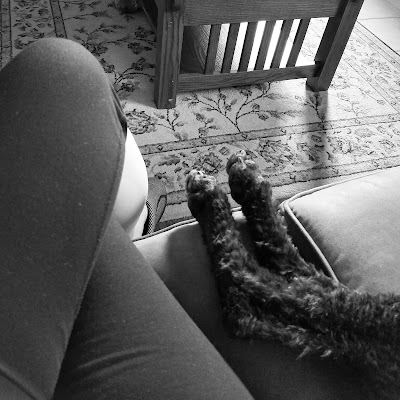 I'm having trouble writing lately, or rather I'm writing things and not publishing them. I suspect many of my blogging friends are in the same boat, and that boat is full of elephants, and do we talk about those? Do we distract ourselves? What is the Right Thing?

I wrote about suicide a couple of weeks ago, in part to let people know I'm okay since I've come out of the suicidal ideation closet (I'M OKAY!), but what the whole thing boiled down to was "love is an active verb, not a commodity to be given, received, earned or deserved" and "what if all that REALLY matters in the end, when your heart is weighed against a feather or Saint Peter consults his heavenly Moleskine or whatever it is that happens, is how you treated other people?" *

It pretty much sounded like your stoned friend yammering at you somewhere between the bong and the biscuits, and so forever shall it remain unpublished, alas.

I also tried writing about one of those other elephants but THAT kept turning into a story about how my privileged, white, US-citizen daughter H was (and still is) completely and utterly fearless and how every time we took her to the emergency room, which was A LOT OF TIMES, I was terrified Child Protective Services would be called in to take her away from us, and how my very first thought when I woke up on the morning of her 18th birthday was, "Now no one can take her." And about the unbelievable relief I felt over that. Which had nothing at all to do with the horror of what is happening in this country and my state right now and, in fact, bordered on appropriation. So yeah.

Since last we spoke, C isn't doing so great, or rather he IS doing REALLY great but only because he currently has zero demands placed on him, WHICH ISN'T GREAT. I've stepped back my involvement with the food pantry to deal with this situation, also not great, and my dealing with it isn't going great because life keeps getting in the way, and I'm spending a lot of time feeling like I'm failing all the people I most definitely do not want to fail and then beating myself up over the fact that I'm beating myself up over that. This is what it's like to live in my brain. Now you know how surprised and delighted I was to make it to 50! (Fifty-one now!)

H moved out of our house again and I think/hope she's doing okay but I don't get to see or talk to her nearly as much as I would like (I would like EVERY DAY please). I miss her more this time than I did last time, what's up with that? I think I just want all my chicks in the nest.

P and I aren't traveling anywhere by plane this year as far as we know, and I am both relieved and disappointed. But mostly relieved. We're taking a couple of car trips this summer and fall, one to visit family and one to celebrate our 25th wedding anniversary, and I don't know where we're going other than "west". For the second one, I mean. That first one is "east" until we hit beach.

I'm knitting a sweater, which is kind of a milestone for someone who up to now has knitted only shawls, scarves, cowls, socks, a few baby items and one ill-fitting hat. It's not at all appropriate for the current season but I've bought the yarn to knit another sweater that WILL BE appropriate for the current season except we're likely to be firmly into the NEXT season by the time I start it, but whatever, I knit sweaters now and I'm kind of excited about it.

I don't know what else to say. I hope you're all doing well. I'm surprisingly good in spite of it all. I'll try to write more often even if it's stupid.

* I'm pretty sure it IS the only thing that matters, and that I have a lot of work to do.
Posted by Kathy at 2:22 PM

Promote Your Page Too
Kathy's bookshelf